A CASE OF CUSTOM TAILORING

A growing interest in sewing, DIY, and cottage industries - along with the rising cost of in-store goods, has resulted in growth for the sewing industry. Demand for computerized and feature - rich machines, is boosting sales. The global market for machines is projected to exceed 29 million units by 2024. In the sewing industry, the brand BERNINA is considered the class leader - Swiss precision for the hobbyist or professional! “One of BERNINA’s greatest strengths is reacting when they see something that needs to be done,” says Susan Fears, Learning Center Manager at BERNINA of America. In the summer of 2016, that’s exactly what Connie Fanders, the Director of Education & Training, did.

While BERNINA is highly regarded for their training and service, Connie knew that training needed to adapt to modern learners at their busy retail partners. She issued a challenge to improve their training delivery more efficiently train more personnel at their retail locations. It was a two-prong approach, first, she launched an effort to find a technology partner who could customize a solution for their specialty industry, second, she brought in Susan Fears as their top-of-the-line product expert to focus on the initial content.

The goal was to start with a B2B program of micro courses for their dealer network. These courses would demonstrate how to sell the BERNINA products to consumers. Education is truly a cornerstone of the company and their training resources were vast, but primarily in written or face-to-face form. Their prior efforts were as effective as possible given the resources at the time, but technology has created new potential for reaching a wider audience at less cost.

While BERNINA is highly regarded for their training and service, Connie knew that training needed to adapt to modern learners at their busy retail partners. She issued a challenge to improve their training delivery more efficiently train more personnel at their retail locations. It was a two-prong approach, first, she launched an effort to find a technology partner who could customize a solution for their specialty industry, second, she brought in Susan Fears as their top-of-the-line product expert to focus on the initial content.

They were already using some online elements into their blended training program. They offered PowerPoint webinars which could be blended with their live event classes, conferences, and hands-on training. Their existing training was expensive (for BERNINA and their retailers) and they discovered long-term retention was challenging. Most of their retailers had limited staff. Sending one or two to a training conference was hard on their wallets and the staff they left behind. In addition, once the newly trained staff returned to their stores, the challenges of daily operations kept them from training other staff members.

On BERNINA’s end, they discovered the cost of large conferences, with dozens of machines being shipped in for hands-on training was cost prohibitive. They questioned the effectiveness of offering training months before the new machines were actually shipped to the retail stores. They needed a way to refresh and remind their retailers of their previous training. 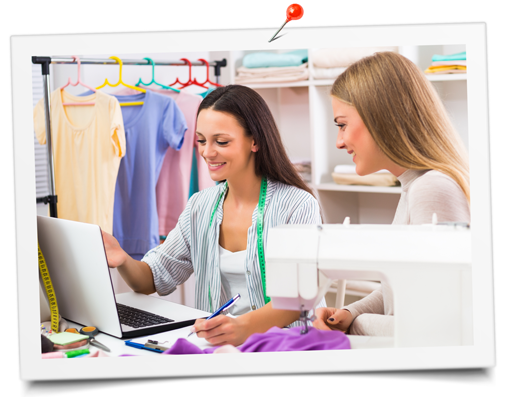 Another training approach was really high-end, sending highly qualified trainers out to individual stores. This was easier and less expensive for the retailers, but extremely costly for BERNINA to hit hundreds of sewing centers. Fanders points out that the turnover of retailers’ trained staff reduced the effectiveness of the training and ROI.

The most in-depth training alternative was a one-week live training at BERNINA’s headquarters in Chicago. Fears describes this effort as valuable, but extremely detailed.... and a little like trying to take a sip of water from a fire hydrant.

Just as technology has created potential new avenues for their training through online mobile learning, technology spurred BERNINA to expedite the launch of new models and features. More frequent innovations in their machine features have resulted in the need to update training more frequently. Armed with solid content, (valuable intellectual property), and a highly qualified training staff - BERNINA was up for the challenge of change.

Getting from Point A to Point B. Roughly six months after they started this process they selected CD2 Learning as their SaaS partner for their ability to customize training and customer service responsiveness. The goal was to create a mobile series of courses that retailers (and their staff) could use on their own time, any location. Assessments would be an important element of the learning, not only identifying strengths and weaknesses but providing trainers with a look at progress and areas that may need more attention.

Assessments also provide users with the important fail/revisit/retake opportunity to reinforce learning. As Fanders explains, “we knew what we wanted, we had the content we needed to be communicated, but CD2 was able to bring our vision to life.” The courses are designed to be engaging and flexible enough for any age user. Because learning styles vary, BERNINA offers PDFs at the end of the lessons in case a user wants to print out information and carry it over to a machine for practice. Even more critical for the effectiveness of their training, the online information can be revisited as often as needed - increasing retention. The flexibility of the courses allows BERNINA to cater content to the audience they are addressing, users can pick out only the information they need, reducing redundancy and burnout.

According to Fanders and Fears, the feedback from their staff and the field has been positive and exciting. Reports from their retail field indicate that this effort is ground-breaking, with no competitors offering a comparable learning program. Their experience with CD2 has also been positive, both stating that what they hear from CD2 is never a “no, we can’t do that.” Together, as partners, it’s been possible to find ways to achieve what BERNINA needs.

Once they got the project rolling, the potential for future efforts became apparent. Eventually, they want to develop content for consumer training and project-based learning opportunities in a way that doesn’t conflict with their dealer-based education programs. Fears looks forward to some of the “bells and whistles” that can be added once the basics have been covered. Because of the ability to easily create and post videos, she points out that showing actual machine applications (such as creating a ruffle or embroidering linens) can now be easily demonstrated to a wide audience. “Sometimes just seeing a process isn’t as compelling as seeing the process being put to actual

In a nutshell, they are delivering exactly the type of effective and engaging learning that can be delivered so economically online. That was their initial need, and as stated earlier, one of BERNINA’s greatest strengths is not just seeing something they need done - but acting on it.